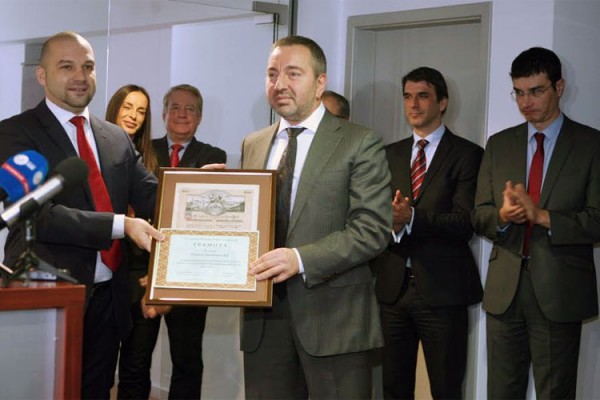 The Annual prize for delivering the most significant contribution to the development of the local stock market in 2014 was given by the Bulgarian Stock Exchange to ELANA Trading on an official ceremony today. The award was designated for ELANA Trading since the broker managed the largest capital increase on the market during the year – raising BGN 20.45 mln. for leading courier company Speedy.

Kamen Kolchev, CEO of ELANA Financial Holding, the majority owner of ELANA Trading, accepted the award and commented that the local stock market will not cease welcoming new companies and public offerings in 2015. Mr. Kolchev pointed out that ELANA Trading is preparing a couple of projects for the year, among which the first will be the public offering of new shares of ELANA AgroCredit planned for Q1.

A traditional annual prize for a second broker with the biggest number of deals on the Bulgarian Stock Exchange was awarded again to ELANA Trading for making over 30 000 deals last year among 61 Bulgarian brokers.

Radoslava Maslarska, Chairperson of the Board of ELANA Trading accepted the award and noted that 2014 appeared to be a year of significant growth for the broker with 58% increase of deals and 90% growth of turnover. An important novelty for ELANA Trading in 2014 was introducing the its platform ELANA BG Trader for all mobile devices.