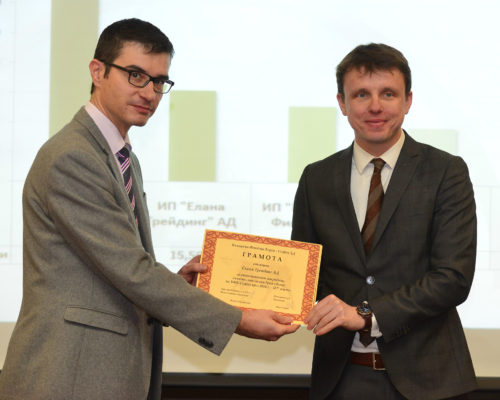 On 11 January 2017 the Bulgarian Stock Exchange organized its traditional annual prizes for contribution to the local stock market and the most active brokers.

ELANA Trading was awarded for the numbers of deals made on the stock exchange in 2016 as well as for contributing to the developing of the local stock market. The latter is a prize given to the broker for the fifth time – this year the reason is ELANA Trading activity as one of the market makers of the newly launched first ETF on SOFIX – SOFIX – Expat Bulgaria SOFIX UCITS ETF. The annual prize for number of deals on the stock market was given to ELANA Trading for 10th consecutive year.

ELANA Trading ranked fifth on the market in annual turnover on the stock exchange registering nearly BGN 81 mln. for 2016. The first in ranking is First Financial Brokerage House with BGN 102 mln.

Other awards for contribution to the local market included media (Bloomberg TV Bulgaria) and two personalities whose activity helped the market: these were Karina Karaivanova (Chair of Financial Supervision Committee) and Delyan Dobrev (MP).

New BSE projects to be launched in 2017

“This year we will implement a number of measures planned in our strategy for capital market development, which we expect to raise turnover and improve the conditions for investors and new companies to come on the stock market”, said BSE Executive Director Vasil Golemanski at the award ceremony. He pointed out that in mid-year we will see treasuries secondary trading on BSE as well as the launch of European and US stocks trading, which is the so-called Bulgaria International project. Golemanski noted that new access will help local institutional investors since they tend to invest in those instruments. He added that BSE plans of launching an SME multilateral trading facility are underway and they will also be implemented in 2017 to encourage SMEs coming to the local stock market.

In December 2016, ELANA Trading was awarded Best Broker of the Year for the fifth time by Banker Weekly after it topped the Bulgarian brokers annual ranking.